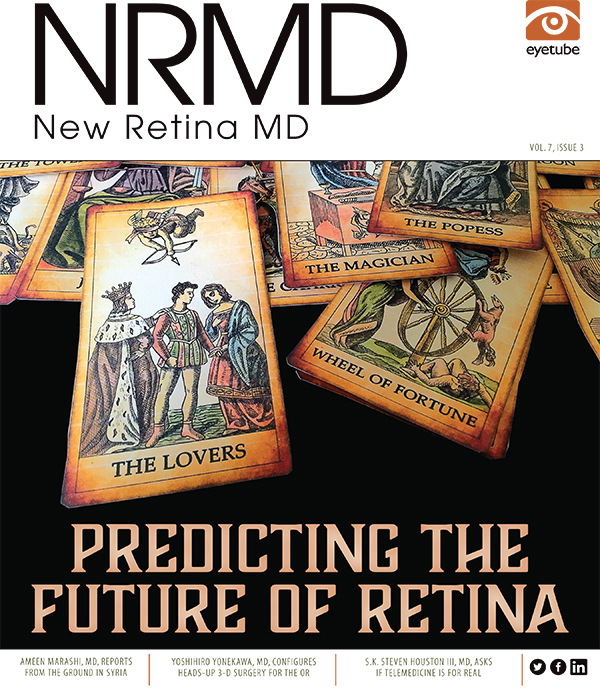 This class of drugs may have potential to treat several diseases. Trials are ongoing.

The current slate of agents for intravitreal injection used in to treat retinal disorders—including retinal vein occlusion (RVO), wet age-related macular degeneration (AMD), diabetic macular edema (DME), and diabetic retinopathy (DR)—is highly efficacious for many patients. However, not all patients are successfully managed with these agents, suggesting that other drivers are responsible for disease progression.

Researchers have long known that integrins serve as “bridges” between cells and regulate how cells interact with each other and with the extracellular matrix. There are 27 known integrins, each named for a specific alpha-beta combination. Integrins have been associated with angiogenesis, inflammation, and thrombosis, so it makes sense to investigate them as potential treatments for ocular disorders. However, finding agents that can inhibit integrins has been challenging. One integrin antagonist, lifitegrast (Xiidra, Shire), recently received US Food and Drug Administration approval for the treatment of dry eye.1,2

ALG-1001 (Luminate, Allegro Ophthalmics) has the potential to target four different integrin sites. This agent has two mechanisms of action. First, it inhibits three integrins considered to be angiogenic; angiogenesis is a key factor in AMD, DME, and RVO. Integrins are known to work both upstream and downstream of the VEGF pathway. Second, ALG-1001 inhibits an integrin-mediated pathway of the vitreoretinal interface, making it capable of inducing posterior vitreous detachment (PVD).3

ALG-1001 seems to have clear anti-edematous and antiproliferative effects. Its mechanism is quite different from that of anti-VEGF agents; therefore, this compound has potential as both adjunctive and standalone therapy. It addresses the goal of using multiple therapeutic approaches with different mechanisms of action that target different aspects of disease. Because ALG-1001 inhibits multiple integrins, including αvβ3, αvβ5, and α5β1, it may be able to prevent new blood vessel formation while concurrently stopping leakage from existing blood vessels.3

Early study results have suggested that this combination of integrin inhibition may be potent enough to be used as monotherapy for DME and AMD. What is particularly interesting, however, is that these early data also suggest that anti-integrin therapy may be effective for patients who have not been successfully managed with anti-VEGF treatments alone. A phase 1 study of ALG-1001 in DME enrolled 15 patients with poor vision and substantial intraretinal fluid who had undergone more than 10 anti-VEGF injections. In this trial, eight of the 15 (53%) patients improved by 3 to 5 lines in visual acuity testing; four (50%) of these patients improved from legal blindness to functional vision in the range of 20/40 to 20/60. Additionally, more than half the patients in this phase 1 trial experienced a 30% to 80% reduction in central macular thickness.3 The substantial improvement seen in these patients has driven the ongoing investigation of ALG-1001 for treatment of DME.

From a pharmacologic standpoint, it has recently become possible to use an enzyme to achieve vitreomacular detachment,4 although surgical removal of the adhesion remains the standard of care. Inducing a posterior vitreous detachment (PVD) in a patient with a normal vitreoretinal interface can be viewed as assisting part of the spectrum of normal vitreous aging. There are numerous hypotheses about how the vitreous releases, and some suggest that overstimulating VEGF could create a depot of sorts at the vitreoretinal interface, possibly causing disease to progress. There is a significant body of evidence that suggests that inducing a PVD may inhibit the progression of retinal disease, particularly DR.5-8

We know that, in proliferative DR (PDR), blood vessels grow onto the vitreous scaffolding. But if the vitreous has undergone a PVD and elevated itself, there would be no scaffolding for vessels to grow onto. In theory, this could stop the proliferation from occurring. Or it might cause the growth to behave more like coral branching out from the seabed, doing little damage because it is not causing traction.

In the phase 1 study of ALG-1001 in DME,3 researchers noted a high rate of PVD. Evidence suggests that ALG-1001 inhibits a fourth integrin—α3β1—and, by doing so, aids in the breakdown of vitreous and its separation from the retina. This separation should move the hypothesized VEGF depot away from the retina, which would, in theory, prevent further damage.

ALG-1001 is being evaluated in several ongoing studies. DEL MAR is a phase 2b study evaluating ALG-1001 as monotherapy, as well as in combination therapy with anti-VEGF agents, and as a treat-and-maintain therapy. According to the manufacturer, results are anticipated as early as Q4 2016. DEL MAR has enrolled almost 120 patients. Efficacy endpoints include mean change in visual acuity and central retinal thickness (as measured by optical coherence tomography) at weeks 16 and 20. The study is evaluating 1.0, 2.0, and 3.0 mg of ALG-1001 in comparison with bevacizumab (Avastin, Genentech). A second arm of the study is evaluating ALG-1001 as an adjunctive therapy after treatment with any anti-VEGF agent, and a third arm is evaluating ALG-1001 in combination with bevacizumab. The last two arms are enrolling an additional 75 patients.3

The PACIFIC study is another phase 2b trial, enrolling about 100 subjects with nonproliferative DR without PVD to evaluate ALG-1001 as a standalone therapy. The trial will assess whether induction of PVD can inhibit progression to PDR. The PACIFIC trial will evaluate four doses of ALG-1001: 1.0, 2.0, 3.0, and 4.0 mg, with balanced saline solution as a placebo. Results from PACIFIC are expected in the first half of 2017, according to the manufacturer. The main endpoint is PVD induction based on optical coherence tomography and/or B-scan ultrasound.3

Another prospective, randomized, double-masked phase 2b study evaluated ALG-1001 in patients with vitreomacular adhesion (VMA) and VMT.3,9 Topline results indicate that this study met its endpoint, with 50% of patients who received the highest dose of ALG-1001 achieving release of VMT or VMA by day 90, compared with 9.7% of those receiving saline solution as placebo (P = .0129).1,2 The study randomly assigned 106 patients to receive ALG-1001 2.0, 2.5 mg, 3.2 mg, or placebo. The drug was well tolerated, with no drug-related toxicity or inflammation noted with repeated injections.

Retina doctors are always concerned about patient safety. Although these early efficacy data for ALG-1001 look promising, the safety data are of particular note. In nearly 1000 human eye injections for these various indications, no significant ocular or systemic safety concerns have been seen.

ALG-1001 shows promising efficacy, with mechanisms of action that are distinct from those of anti-VEGF therapy. This gives hope that the compound may become a new weapon in our armamentarium that may be complementary or additive to anti-VEGF therapy. If the results from DEL MAR, PACIFIC, and other future studies confirm early findings, ALG-1001 may become a viable alternative approach to both pharmacologic vitreolysis and treatment of AMD, DME, and DR. n