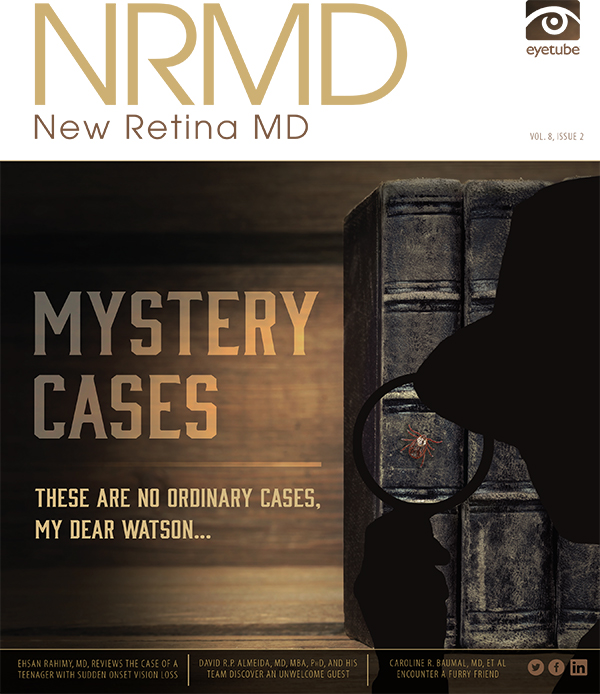 The Curious Case of the Barbed Hairs

An itsy bitsy problem that could not be washed out.

A 19-year-old woman had experienced recurrent episodes of episcleritis in the left eye for more than 3 months despite a variety of treatment regimens, including topical and oral corticosteroids. None of the specialists with whom she visited prior to moving to Massachusetts could figure out the cause of her relentless symptoms. She presented at the New England Eye Center in Boston shortly after moving to the area, complaining of new floaters and decreasing vision in the same eye.

She found her way to the retina service, as all patients with floaters eventually do. A chronic localized area of episcleral injection was noted temporally in the left eye with mild anterior chamber cellular reaction. The retina team examined the posterior segment and found foci of vitritis overlying small yellow chorioretinal lesions, localized in the inferotemporal quadrant. These unilateral lesions were hyperfluorescent on fluorescein angiography without evidence of vasculitis, and they appeared as hyperreflective spots on the inner retina on optical coherence tomography (OCT). Systemic workup for sarcoidosis, syphilis, and tuberculosis were all negative, as were aqueous viral studies.

Fortunately, the examining resident, an aspiring cornea specialist, meticulously examined the anterior segment and discovered two tiny, barely visible hairs embedded in the corneal stroma (Figure 1). Imaging with in vivo confocal microscopy confirmed the presence of two arrow-like hairs in the anterior stroma. This was the “aha!” moment. Closer questioning revealed that the patient had previously owned a pet Chilean rose tarantula, also known as a rose hair tarantula. With this knowledge, the patient was diagnosed with ophthalmia nodosa, a rare ocular inflammatory condition initially described after ocular exposure to caterpillar hairs.1

How do tarantula hairs affect the eye? When a tarantula perceives danger, it rubs its legs against its abdomen and bombards the perceived attacker with arrow-like hairs, which can slowly penetrate through the cornea and conjunctiva into the anterior chamber, vitreous, and retina, causing a spectrum of panocular inflammatory findings.

Figure 3. Five types of barbed hairs. The hairs on the tarantula in question are type III.

A bigger problem in the case discussed here is that tarantulas are advertised as household pets for children, with claims regarding their supposed docility, long lifespan, low maintenance needs, and seemingly nonvenomous, harmless nature. However, the apparently prettier Chilean rose tarantula, our patient’s pet, has been specifically associated with chronic complicated cases of posterior uveitis due to its invasive urticarious hairs (Figure 2).2

Local and systemic corticosteroids can be used to treat the inflammation. Removal of the offending hairs from the cornea or posterior segment is effective but not always feasible due to the barbed, microscopic nature of the rose tarantula hairs (Figure 3).3

This is the second case of tarantula-induced ophthalmia nodosa that we have encountered at the New England Eye Center. The first occurred in a child who required multiple corneal procedures to remove spontaneously extruding hairs. Some might argue that an awareness campaign directed toward pet owners and health care providers could help to address this problem.

Although our patient was brave enough to buy a pet tarantula, she was too scared to undergo vitrectomy, so she was treated with a sustained-release intravitreal dexamethasone implant (Ozurdex, Allergan) instead. This led to resolution of the vitritis and improvement of the temporal retinal lesions on OCT. Because of the nonspecific clinical findings and limited awareness of this condition, the ophthalmologist must be astute to reach the correct diagnosis and institute appropriate management before things get too hairy!

By the way, in further questioning regarding her dear pet, the patient reported that she had given it away to another victim (owner?) before she moved to New England.