Venture Investing in Ophthalmology and Retina

Track No. 3: An interview on the financial factors affecting the retina specialty.

By the Editors of New Retina MD

Ophthalmology and the retina space have witnessed a tremendous amount of innovation over the past 2 decades. It would seem logical that the well might run dry at some point, and that the pace of investment into new technologies, drugs, and devices in ophthalmology may begin to decrease. It seems there is still high demand in the eye sector, however, which is continuing to attract venture investing. This is particularly true in retina—the most highly funded field in ophthalmology.

But why is there so much demand? And are economic forces poised to change this balance? To get a sense of why venture investors are so interested in ophthalmology—in particular, the retina space—New Retina MD spoke with Emmett Cunningham, MD, PhD, MPH, an ophthalmologist and partner in Clarus Ventures, one of the most well-recognized and successful institutional investment funding sources in eye care. As Dr. Cunningham pointed out, there is every reason to believe that venture investments in ophthalmology and retina will continue to fuel innovation well into the future.

Emmett T. Cunningham, Jr, MD, PhD, MPH: Innovation in ophthalmology, and in retina, is alive and well. One simple metric is the amount of capital that is put to work in the space each year. If one looks at health care investing broadly, roughly $4 billion in venture capital was put to work in 2014 (Figure 1). Of this, about $400 to $500 million was directed toward ophthalmology. This is in comparison with an annual funding budget at the National Eye Institute (NEI) of just under $700 million, a figure that has been flat in absolute terms for over a decade and effectively down 25% during that period after adjusting for inflation (Figure 2). Mature public companies in aggregate contribute more to ophthalmic innovation than the NEI and venture combined, and retina constitutes the lion’s share of such investments at all stages.

What are the factors driving venture capital interest?

Dr. Cunningham: The easy answer is that the interest reflects the size of the market and the unmet need. Baby boomers are reaching an age where they will face a number of eye problems, including presbyopia, cataract, age-related macular degeneration (AMD), diabetic macular edema (DME), and glaucoma—all very large market opportunities with considerable unmet need. 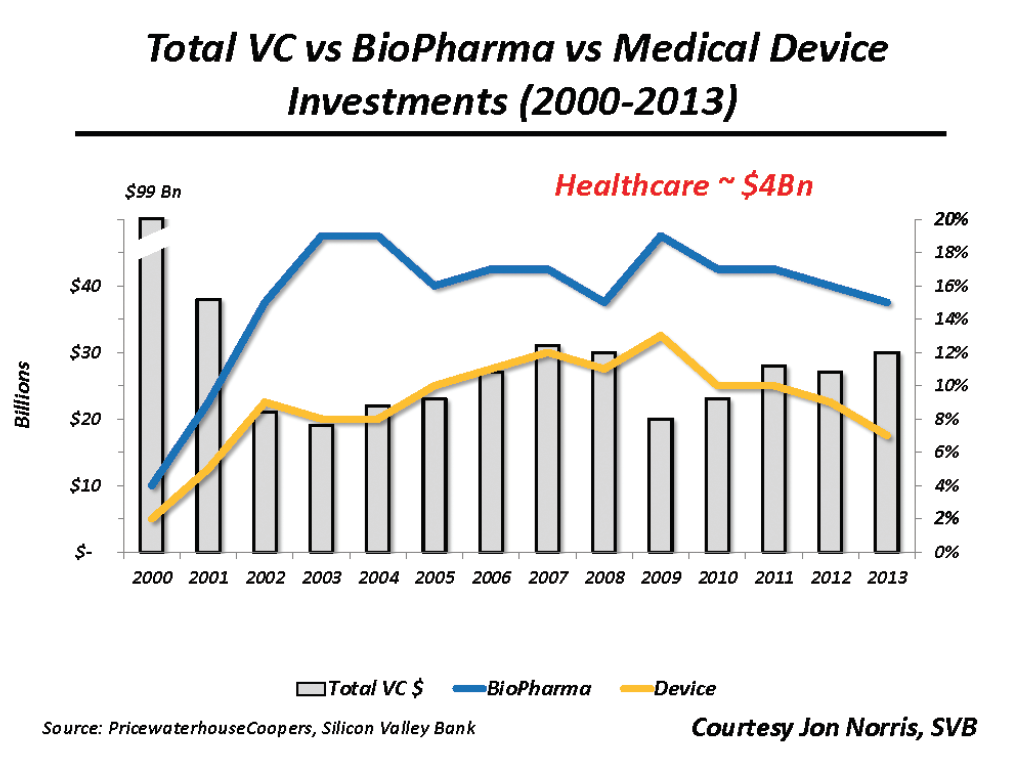 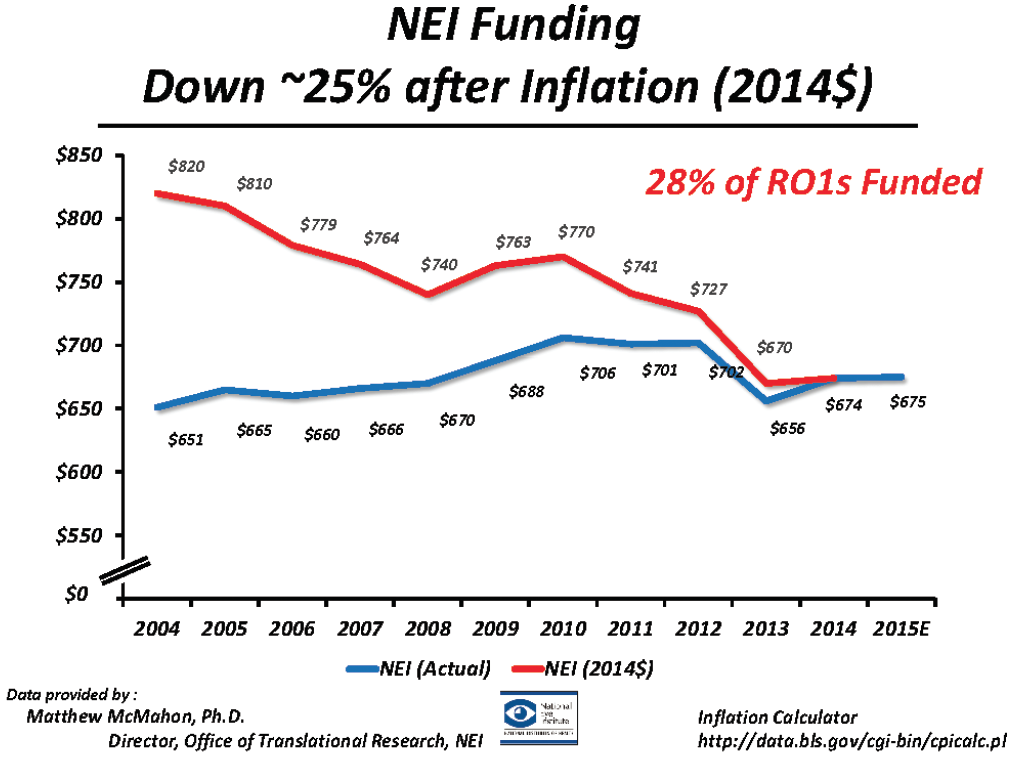 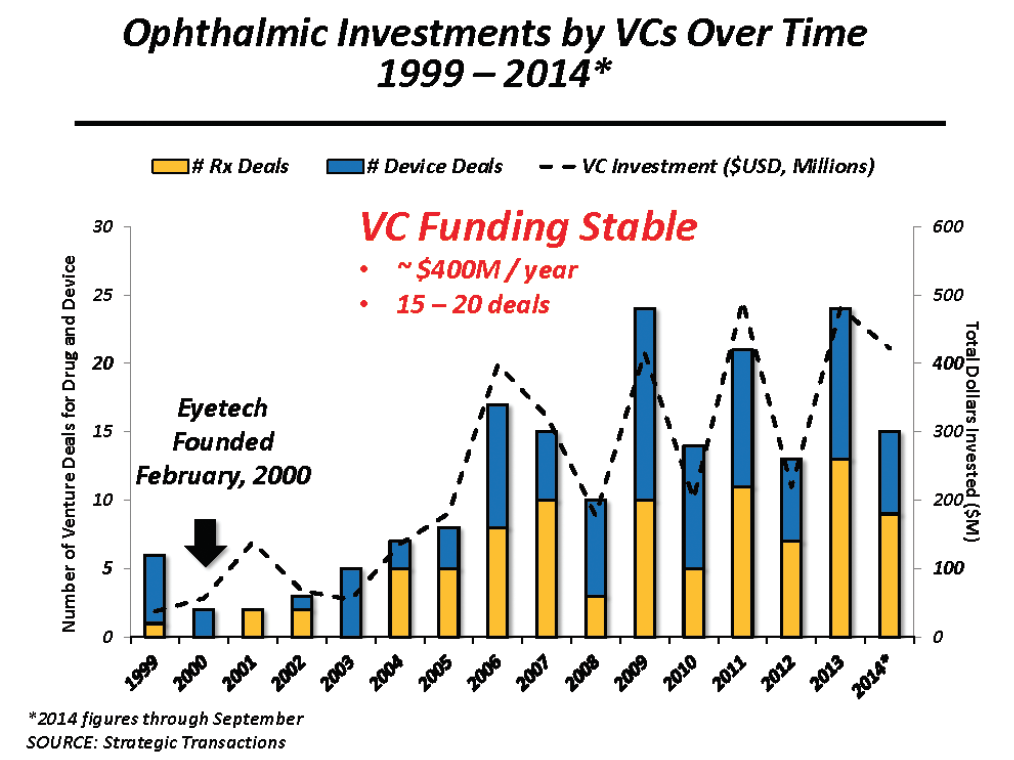 I think there is another factor driving interest, however, and that is historical precedent. If you chart venture investments in ophthalmology beginning just prior to 2004, you will see a tremendous increase in investments over the past decade (Figure 3). So, what happened in 2004? That was the year Eyetech Pharmaceuticals went public with pegaptanib (Macugen), the first anti-VEGF medicine for treatment of neovascular AMD. Eyetech and pegaptanib were, relatively speaking, tremendous successes, and the company was a predictor of how big an impact emerging private companies could have in the ophthalmology space.

Before Eyetech, I would say ophthalmic innovation was pretty stodgy. Even the most innovative eye companies were largely repurposing old drugs from other fields and applying them to the eye. Ophthalmology was a relatively low innovation sector, but Eyetech changed that. They took a state-of-the-art target, which was VEGF, and a state-of-the art product at the time, which was the aptamer pegaptanib, and got the first approval for neovascular AMD—a huge unmet need. I think that opened the gates. Prior to anti-VEGF, doctors treating neovascular AMD just held their patients’ hands and led them into darkness. David R. Guyer, MD, Samir C. Patel, MD, and Anthony P. Adamis, MD, deserve a tremendous amount of credit for Eyetech and pegaptanib.

Where does venture money play a role in the innovation cycle?

Dr. Cunningham: There are venture groups that are active across all stages of development, from early preclinical and phase 1/2 trials to later stage clinical development and even commercialization. The most important stage, in my opinion, is from target validation to human proof-of-concept, which some might call true translational research.

Is there a changing landscape for the development of new drugs and devices in ophthalmology?

Dr. Cunningham: The environment has changed. On the positive side, venture activity is increasing, and that fosters more translational research and clinical validation of exciting new targets and approaches. Moreover, public investors have taken a keen interest in ophthalmology, funding the greatest number of ophthalmology initial public offerings in history in 2014.

On the less positive side, large companies have been fairly distracted by a series of mergers and acquisitions in the space. Many public investors have signaled that they want these more mature public companies to decrease their internal spend on research and development—largely because the returns on investment have been disappointing. This has left large, publicly traded companies with less money to direct toward both internal innovation and external partnerships.

What about the consolidation within the ophthalmic space? What effect does that have on innovation and commercialization?

Dr. Cunningham: That has actually been a huge factor because there are simply fewer players at the table today. There have been acquisitions, such as Activis buying Allergan and Novartis buying Alcon, and reorganizations, such as with AbbVie and Abbott Medical Optics. Whatever the case, consolidations serve as a distraction and decrease the time and energy spent on both internal and external innovation. The number of potential bidders has been reduced from six to three, and that makes it harder to generate competing interest—which, of course, is less attractive for small companies.

What is the effect of rising costs in innovation relative to risk? How are companies insulating and protecting themselves?

Dr. Cunningham: It is true that it takes more money and time to take any given project from inception to approval, and a lot of that has to do with the rising costs associated with clinical development. Some of it has to do with the process of dealing with regulatory agencies, but that is by no means the largest factor—it just costs more and takes longer to conduct large phase 2b and phase 3 trials these days. If you are the second entrant to a space with an anti-VEGF drug, and you have to show noninferiority to placebo as opposed to superiority—which a first entrant might have to show—that is going to take longer and cost more. So, the question becomes: How do companies mitigate that risk?

In truth, I do not see a way to reduce the time or cost associated with innovation in the current environment. There are some exceptional scenarios such as orphan indications, which may require comparatively smaller phase 3 trials, but these are the exceptions. Obviously, those exceptions are attractive to venture investors because they are associated with lower costs, but the most important consideration is the overall likelihood of success. How validated is the target or approach, market size, and unmet need? The clinicoregulatory path and reimbursement need to be clear—or at least as clear as they can be.

From the BMC Archive

The Industry Side: It’s Not All About the Money